DAB Preview: What happens in Vegas stays in the Points column

Sunny weather, casinos as far as the eye can see, and fourth best team in the NHL. These are all the things you can find in Las Vegas, and the Devils are about to experience it all for the first time. With the final push for the playoffs fully underway, every potential point is a critical one. New Jersey and Columbus continue to rotate between the first and second wild card spots, and it is Jerseys turn to leapfrog them back into seventh place.

Sitting at 78 points with 13 games remaining, the Devils are one point back of Columbus and just three back of Philly for the third place spot in the Metro. Like Mondays game against the Predators, every game down the stretch will have a playoff environment surrounding it and Jersey’s team will have to find a way to play at another level. Hynes stopped practice midway through yesterday due to a lack of effort and simply stared his team down before resuming. Hopefully this reminded them that they have an important game to play and it’s not just a vacation.

In their first meeting, Vegas bested the Devils 3-2, although New Jersey did put up a strong effort. At 5-1 so far in the month of March, Vegas is comfortably in first place in the Pacific. While it’s still too early to put it in cruise control, you might be able to catch them napping early on as long as you are flying from the start. The Golden Knights are 8th in the league on the power play but tied for 15th in penalty kill.

David Perron: With 5 points in his last 5 games (1 goal, 4 assists) it’s safe to say Perron is one of the hottest players for Vegas right now. The top line for Vegas hasn’t been producing much as of late, but players like Perron have stepped up to carry the load. He put up a goal and an assist against New Jersey once already, so they will certainly have to keep an eye out when he’s on the ice.

Ryan Carpenter: He is coming off of a GWG in the closing minutes against the Flyers and has been generating more shots in his last few games. Carpenter is smart in his own end and has a 51.3% Corsi score, even though he starts 53% of his face off shifts in his own zone.

Nate Schmidt: Schmidt has been a rock on the blue line all season long. He eats up over 22 minutes a game and has 18 of his 26 assists at even strength. In just his fourth season in the league he plays like a veteran and is very quick in his decision making. If he is getting his shot to the net tonight don’t be surprised if one of the rebounds get put home.

Drew Stafford: While he hasn’t been getting rewarded in the form of points, Stafford has been playing incredibly smart hockey his past few games. His puck possession along the wall has been strong, and you could argue the line of Wood-Boyle-Stafford was one of the best against Nashville. Expect to see him around the crease and possibly even setting Wood up for a crucial goal in this one.

Michael Grabner: This obviously is an incredibly frustrating one. Grabner has yet to record a point in 8 games and has only registered 11 shots. While has had some great chances, he has either missed the net or just not been able to bury the puck. It is also clearly in his head at this point. In speaking with NJ Media, Grabner stated, “”When the season starts, you think about it and then things get rolling. When you come to a new team, it’s kind of like your season starts over again. So you just want to get the first one and get the monkey off your back. Just help out.” In the same way Schneider needs to find a win, Grabner desperately needs to find a goal, or at least a point, to get going. 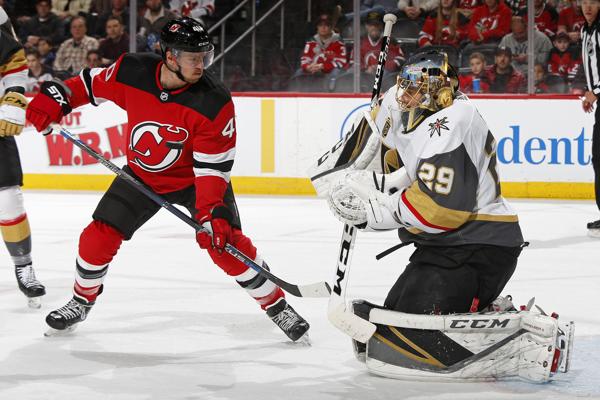 Keith Kinkaid: It appears that Kinkaid will be getting another start in net following arguably the best goalie performance we have had all season. He is 7-3 in his last ten games with a .921 save percentage. He has been tracking the puck well and his compete level in the crease has been outstanding. It is never pretty (unless he flashes the leather) but he has been doing whatever is necessary to keep the puck out. With every point a crucial one, you have to ride the hot hand and Keith is being given his chance to run with this opportunity.

Prediction: The win against Nashville is the type of game that can propel a team on a hot streak. The Devils will need to find a way to break the two goals a game barrier, and I think the depth scoring helps them get that done tonight. Add in the fact that Vegas did not look impressive at all in beating Philly and that equals a Devils win 4-2 in another incredibly tough building.